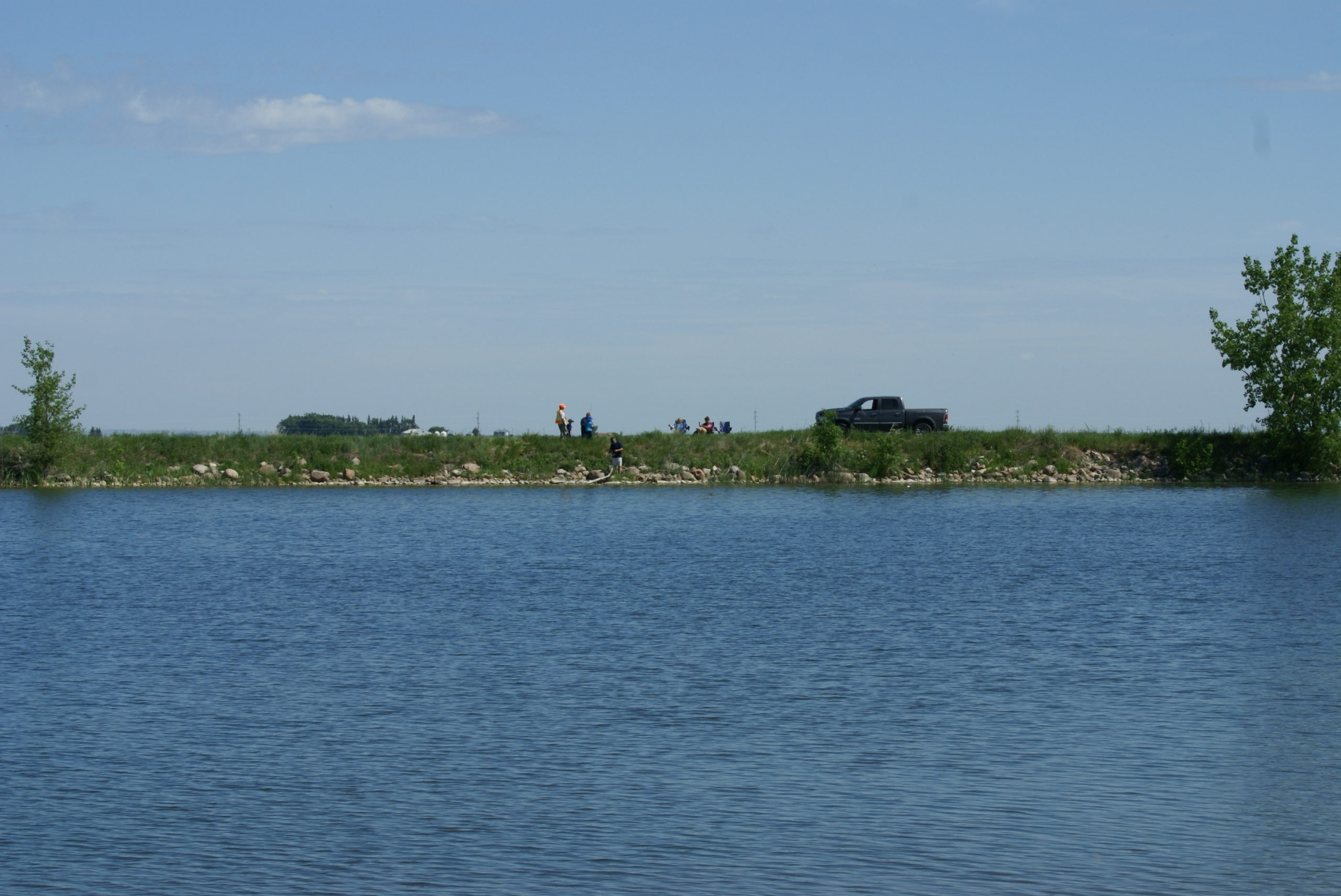 Years ago, when I was quite a bit younger living in Manitoba, I had a favorite lake trout spot. Getting in was an adventure involving boat ferries, portages and lots of sweat. But it was all worth it when the stars along with our effort and experience aligned and everything came together.

In those days there was a lot of trial and error and some cursing. Back then there were no sonar units to help locate the fish. We had a chart that told us the preferred temperature range of the intended species. We would lower a thermometer until we found the temperature we were looking for. The cord was graduated in feet so we could now tell the target depth.

Getting down to the proper ‘guesstimated’ depth was accomplished by ‘long-lining’. I had a large Penn level wind reel mounted on a very stiff trolling rod spooled with braided steel line or, sometimes, lead-core line. We would add 2-6 ounces of lead weights to take the lure down then troll around until we hooked a fish, the lake bottom or each other. There were a few times we put in to shore to untangle our lines. On occasion you would catch a fish and not realize it because of the heavy weights and gear. I recall many time finding a drowned fish on the end of my line when I finally pulled it in to check things out. Yes they can drown.

Now jump forward to modern times and some modern equipment. Whenever I have to go deep for lake trout or any other species I tend to us downriggers. The downrigger is basically a spool of cable with a weight called a ‘cannonball’ attached to the end of it. The cannonball allows you to efficiently lower your lure to the proper depth. Cannonballs can we lowered manually or electronically depending on what your budget allows for. The lure or bait is attached to the cable by a release clip. These clips cost $10 – $15 or so depending on features and leader length. One end of the release clip is attached to the cable and then the fishing line from your rod and reel is clipped into the release. Use of a rod holder is highly recommended. Release tension is set up so that when you get a strike the line will be pulled from the clip and you are now playing the fish directly without any encumbrances. The ideal location for downriggers is towards the rear of the boat.

Well, you are now out on the boat and your sonar says the fish are suspended between 45’-50’. You now lower the cannonball to just below the surface and attach your release clip. Your fishing rod is in the rod holder with your favorite lure attached and now you will strip 12’-20’ of line off the reel and attach it to the release clip. The reel’s drag should be set a bit light so when you start lowering the cannonball you do not get a premature release of your line popping off the clip. The downrigger weight is then lowered to the proper depth by using the depth counter on the downrigger. I have always found that cannonballs with fins work best as they stop the weight from spinning. This style of cannonball will set you back $35 to $100 depending on the weight of the ball. Once you are the proper depth you increase the drag and take up any slack line so that your rod has a nice bend in it from the tension. This will assist in setting the hook when a fish strikes and your line releases from the clip. With a little practice and set up anyone can be proficient with the system. The angler is then free to play the fish on the rod and reel alone. When a fish is on it is recommended that the downrigger weigh be cranked back up to avoid tangles. On one occasion I cranked up the ball only to find that a lake trout had actually bit the ball. Since the ball had a rubberized finish the fish’s teeth gripped tight. Once at the surface he/she let go.

There are times when the fish are stacked at different levels. I occasionally use something called a mid line to up the ante. You will attach this once you have the downrigger set up and running. A mid line is simply a 6’ length of monofilament line with a lock snap attached to each end. You now hook a different lure (non-diving) to one end and then snap the other end onto the cable and throw it behind the boat. With this system you have the one lure running low and the other slides down the cable to about ½ the depth of the bottom one. This is due to the tension and curve in the cable from water resistance while trolling, hence the term mid line. If you get a strike on this line it simply slides down to the release where the clip releases and you are now playing the fish directly.

There are a couple of companies manufacturing downriggers and one can purchase basic ones from Scotty or Cannon for around $110 to $130. Models with more features and less cranking run $210 to $250 with electric model available from $550 to $1,000 or more.

Alright, so you will only be going out once or twice and do not want to make this investment. If this is the case fear not for Luhr Jensen makes a Deep Six, Dipsy Diver, Jet Diver and a Pink Lady. All of these devices work in a similar way. They run at an acute angle which takes your lure down. The units come with a chart that tells you how deep they will run by the line weight, size of the unit, trolling speed and how much line you let out. Once you get a strike the unit trips and the angle is changed so it is easier to fight the fish. I have used the Pink Lady and the Deep Six with good results. These units are available from $20 to $30 so they will not break the bank.

I suggest that you head to one of our Alberta lakes that hold Lakers and give it a try this summer. Downriggers can be used on many species of fish when you need to get down to a specific depth. Don’t be afraid of them. They are your friend. 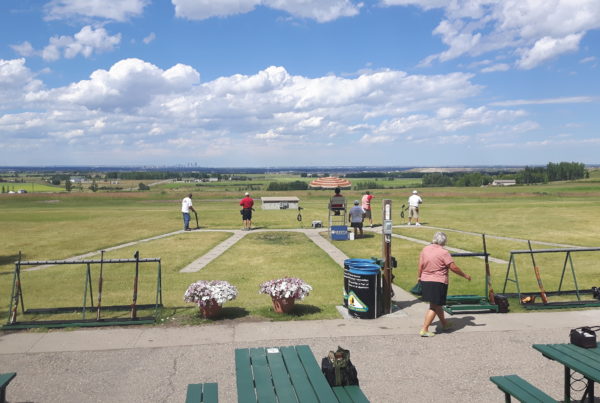 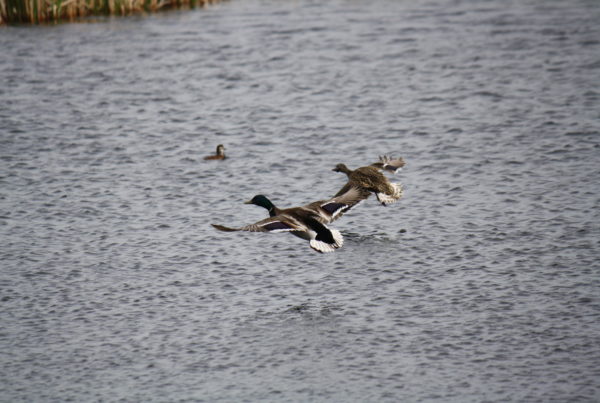 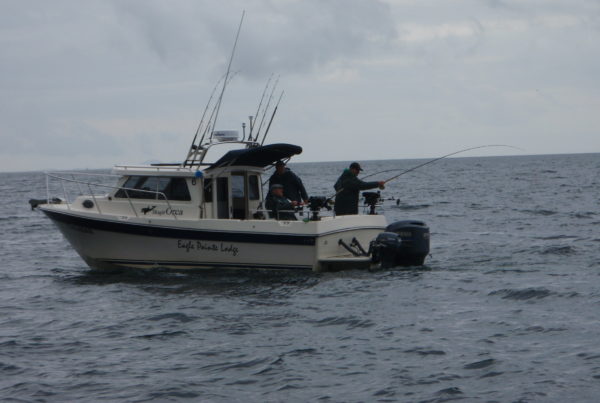