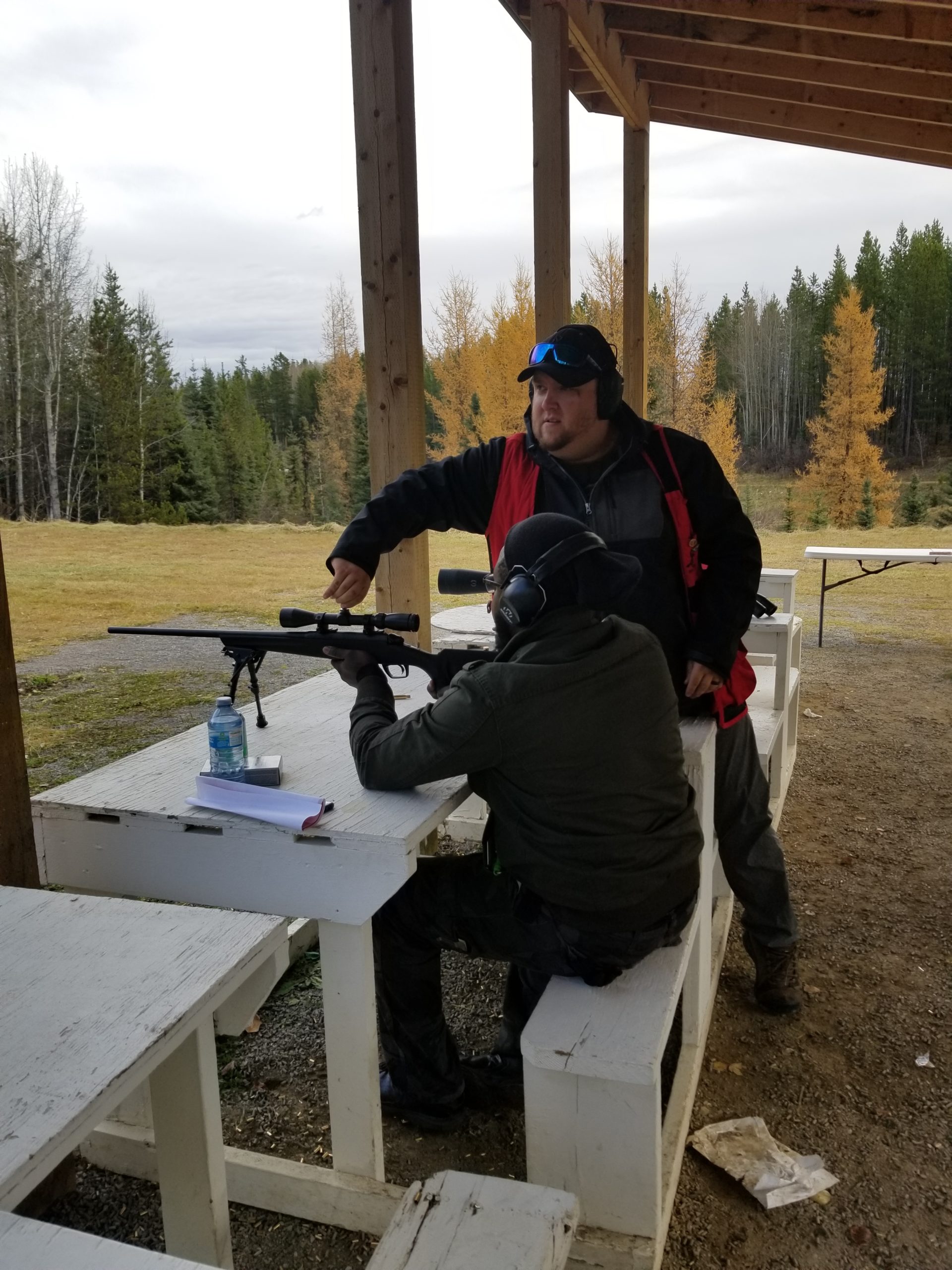 How to Sight-In a Rifle

Setting Up Your Scope

After you’ve mounted your new scope on your rifle, check one last time to make sure the scope is secure in the rings and that the scope rings are tightly mounted to the base. There should be no wiggle whatsoever to the scope.

Next, you’ll need to focus the reticle on your scope. You want the crosshairs to be instantly sharp and in focus when you look through the scope. To do this, point the scope at a solid background (like the sky). Then look away from the scope for a few seconds at a distant object and let your eyes focus on it. Now, look back through your scope for an instant and then look away again.

Was the reticle perfectly in focus? Or was it a little blurry?

You’re looking for a snap judgement here because your eyes will start to adjust if you stare at the reticle for a few seconds. If the reticle is blurry, twist the diopter adjustment on the scope. This is normally located at the end closest to the shooter.

Continue to adjust until the reticle is clear and focused. 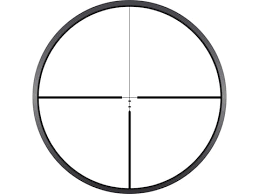 When you mount a new scope on a rifle, it’s best to bore sight it before actually shooting the rifle. First, ensure that the rifle is unloaded and that the barrel is unobstructed. Then, remove the bolt of the rifle and mount the rifle in a secure rest, pointing downrange. Standing behind the rifle, look through the bore and center the target in the bore by carefully moving the rifle. Then, without moving the rifle, adjust the scope to center the scope reticle on the same target. The turret on the top of the scope adjusts the elevation (up and down) of the reticle while the turret on the side adjusts the windage (left and right). It is not vitally important for the bore sight to be extremely precise. It just needs to be close enough so that the rifle will hit somewhere on paper at 25 yards in as described in the next step. 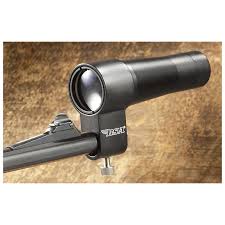 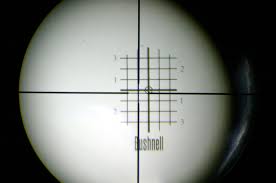 Getting On The Paper

After bore sighting the rifle, you’re ready to start shooting! It should go without saying, but I’ll say it anyway: when you sight in your rifle prior to going hunting, make sure you use the same type of ammunition that you’ll be using on the hunt. Some rifles are pickier than others, but it is virtually guaranteed that your shots will shoot to a different point of impact if you sight in your rifle with one type of ammunition then use a different brand, or bullet weight, on your hunt.

To start, shoot at 25 yards first, then fine tune your zero at longer ranges.  This saves time, ammunition, and frustration in the long run by avoiding taking shots at 50 or 100 yards that don’t even hit the target. The exact target doesn’t really matter at 25 yards as long as it has a distinct aiming point. Some people use bullseye targets with lots of success. However, a dedicated zero target with an easy to use grid format helps easily determine adjustments.

When sighting in your rifle, it is very important to shoot from a stable position with lots of support. Use sandbags or a specially built rifle rest to do this. Whenever possible, avoid supporting the rifle with your muscles as this is less precise than using a stable object like a shooting bag. 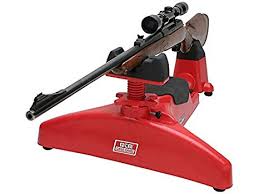 Once you’re set in a steady position, fire three shots at the center of your target at 25 yards. You may be able to see your bullets holes in the target through your scope. No matter where you see the bullet holes in the paper, do not change your point of aim. Keep aiming at the bullseye or you’ll end up chasing your shots all over the target. It’s ok if you don’t hit the bullseye at first, in fact, you almost certainly won’t.

After you fire your first group, check the target to see where you’re hitting. Measure from the center of your group to the bullseye and adjust your scope accordingly. Most rifle scopes have 1/4 MOA adjustments. This means that 1 click will move the bullet impact 1/4″ at 100 yards. Note, this means that you need to make 4 times the number of clicks (16 clicks=1″) to move the bullet impact the same distance at 25 yards. For example, if the point of impact on the target needs to move 1/2″ left and 1″ down. At 25 yards, with a 1/4 MOA scope, that’s 8 clicks left and 16 clicks down.

The turret on top of the scope moves the bullet impact up and down, while the turret on the side moves it left and right.  Most scopes have the measurement increments annotated on the turret along with the proper direction to turn it. For example, assume I shot a group at 25 yards that hit 1″ low and 4″ to the right. Since I need to move the bullet impact up and to the left, I’d turn the top turret 16 clicks clockwise and turn the side turret 64 clicks counter-clockwise.

After making the required number of adjustments, shoot another group at the bullseye. If that group hits where you’re aiming, you’re ready to move the target out to 100 yards (or whatever range you want to zero your rifle for). If not, make the necessary adjustments to the scope and shoot until the rifle is dialed-in at 25 yards.

Of note, be sure you let your barrel cool adequately between group shots though. This is more of an issue with some cartridges than others, but most rifles will shoot to a different point of impact with a hot barrel. If your barrel is hot to the touch after shooting a group, just take a few extra minutes to let it cool down before shooting again.

Using the same techniques described earlier, shoot a group at 100 yards. Since you zeroed the rifle at 25 yards, it should be at least hitting the paper at 100 yards. Measure the distance from the center of your group to the bullseye and adjust the scope as necessary. Remember: 4 clicks=1″ at 100 yards, not 16 clicks, like at 25 yards!

When zeroing at 100 yards, your windage should be dead on. However, there is some debate as to where your shots should be hitting elevation wise. If you’ll be hunting at a relatively short range, then it might make sense to adjust your scope so that the bullets are hitting the bullseye at 100 yards. However, sighting in your rifle so it hits slightly high at 100 yards has advantages as well. Each rifle and cartridge is different and an ideal 100 yard zero varies.  Most boxes of ammunition have that information on them, or you can use a ballistic calculator. Then, sight in your rifle so that it hits the correct distance above the bullseye at 100 yards.

After you’ve made your final adjustment, fire one last group to confirm it. If the group hits where you want it to, you’re done. Though it’s always a good idea to check your zero prior to hunting season, a good scope will hold a zero for a long time, as long as you don’t drop or damage it. 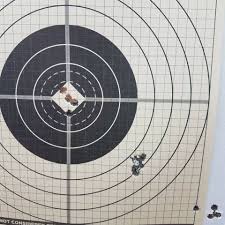