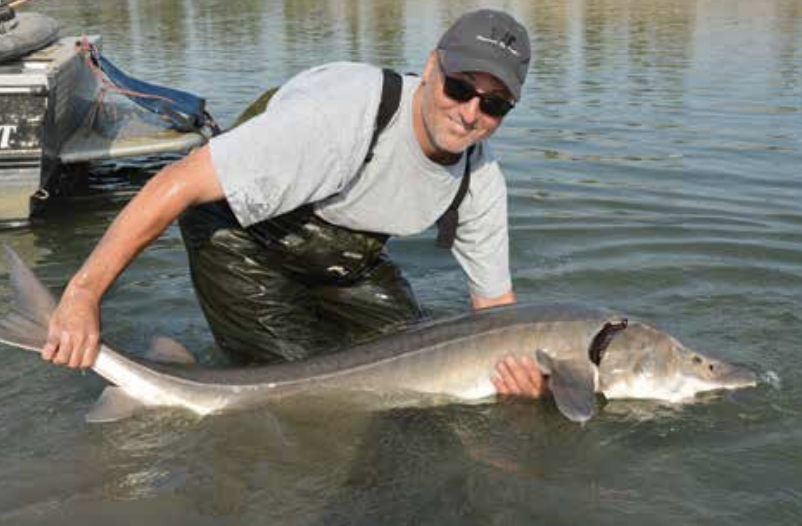 By Janine Higgins December 2, 2022 No Comments

Lake Sturgeon have been calling Alberta rivers home for thousands of years — with little change to their appearance since the dinosaurs roamed the earth. As the largest fish in Alberta, Lake Sturgeon are a popular sport fish due to their strong fight and unique body. Unlike many fish species in Alberta, their body is covered in denticles instead of scales, and have five rows of bony plates called scutes. Their shark-like tail, and up-turned nose with four whiskers (called barbels to help locate food), make this gentle giant a unique fish to snap a pic for Instagram despite it being catch and release fishing only. While these popular fish are sought after by many, their populations are not doing as well as we’d like to see, as they are currently listed as Threatened under Alberta’s Wildlife Act. Across Canada, Lake Sturgeon are vulnerable to overharvest and poaching, habitat degradation, habitat fragmentation (from dams and weirs), and slow to recover due to late age at maturity and gaps in spawning years. Habitat degradation is due to water pollution from industrial, agricultural, and city effluent, and livestock sources; habitat alteration is due to changes in water flows from dams or water withdraws. Habitat fragmentation (due to dams) prevents the movement of lake sturgeon between the North and South Saskatchewan river system. Lake Sturgeon also suffer from being over-loved; many anglers want to take a photo with their Sturgeon catch, but mishandling (fish that are dropped, held vertically, fingers in gills, held out of water) can lead to injury or death of the Sturgeon. Poaching or misidentification (“is this a sucker fish?”) is also a killer of these fish. Because Lake Sturgeon don’t reproduce every year, and are late to mature, population recruitment (adding fish to the population) is a slow, long-term process. The good news is that Lake Sturgeon are increasing from the critically low population levels of the past century, but are still in low numbers with few mature fish. Monitoring the Lake Sturgeon population in the North Saskatchewan River is no small feat, as it takes a substantial number of angling hours to collect enough data. Thankfully, a group of dedicated citizen scientists are always keen to step up to the plate and lend Alberta Environment and Parks (AEP) a hand. Since 1991, volunteers have been assisting with catching, tagging and measuring Lake Sturgeon, following the same methods that AEP fisheries biologists use to estimate population size. In 2022, these volunteers committed their sought-after summer fishing trips on the North Saskatchewan River to support this project. After attending training, volunteers were given a special fisheries research licence to use two fishing rods, tag and measure fish, and all the required sampling equipment. They captured and checked for a tag (Passive Integrated Transponder (PIT)) using a hand-held scanner, and inserting one just under the fish’s skin if the fish is not tagged. By tagging fish and recording previously tagged fish, fisheries biologists can estimate the number of Lake Sturgeon in the river. Jeff Krukowski, a citizen scientist who’s been involved in the program since 2003, says, “Sturgeon are an incredible fish and extremely fun to catch. I am very lucky and fortunate to be able to participate in the citizen science program for Sturgeon in Alberta. These fish are very special and need our help to protect them and to make sure that they are in our river systems for generations to come. AEP does a lot of good work protecting Sturgeon, and the citizen science program is a way for fisherman to contribute to these protection efforts.” While the fishing season isn’t over yet, volunteers caught over 445 fish this summer! A similar project will be completed on the South Saskatchewan River system next year, so that the population status of Lake Sturgeon can be updated in 2024, which will inform the federal status under the Species at Risk Act. If you’re heading out fishing for this species, make sure to use the correct gear — fishing line greater than 30 lb test, and a heavy action rod and reel to quickly land and release the fish. It is not recommended to fish with a pickerel rig. Always keep the fish horizontal and in the water and have your camera ready and release the fish as quickly as possible after catching it. If you see an angler keeping a Sturgeon, please call Report a Poacher at 1-800-642-3800 — our citizen scientists always have bright orange volunteer angler flags to identify them. More information can be found on My Wild Alberta on Facebook, mywildalberta.com or aberta.ca by searching Lake Sturgeon.